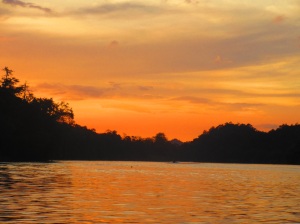 Our year of travel

It’s all about the altitude!

A week after leaving Cusco, we’d made it to Puno on the shores of Lake Titicaca – via a stop-over in Arequipa to visit the Colca Canyon – and it was hailing.

I’d come out in shorts, t-shirt and flip-flops and was now sat with Helena, huddling for warmth around a heater in a cafe, clutching a hot chocolate.  We were wet, cold, and wondering what the hell we were doing. ‘Is it time to go home yet?’ one of us said (although I genuinely can’t remember who).

So, in those situations, there is only one course of action: drink! Firstly hot chocolate, (which Helena has just reminded me actually had Bailey’s in it) but soon thereafter, Pisco – a grape based spirit enjoyed by Peruvians across the country.

Despite Puno being our last stop in Peru, we hadn’t actually had a proper Pisco Sour up until that point; a situation that was quickly, and repeatedly, rectified.

Colca Canyon
Before Puno though, we went to Arequipa, a city dwarved by the huge volcanoes, El Misti and Chachani.  We had neither a hostel nor any activity booked but we’d heard that the Colca Canyon was well worth a visit, and managed to find a tour agency that were doing trips every day. We could have done a single day excursion, getting a bus to the canyon, visiting all of the key points, and returning the same day. Tempting as that sounds, we were keen to avoid a repeat performance of our Grand Canyon experience (10 hours on a bus for 90 mins of frantic and crowded photo taking), so went for a two-day option where you trek down into the canyon on the first day, before climbing back out again on the second.

Now, we assumed that having done quite a lot of hiking by this point, that the canyon experience would be somewhat of a breeze. However, we totally underestimated the difficulties involved by inverting the gradients, i.e. by climbing down into the canyon and then having to climb back out again. Not only does the walk down dig into your legs way more than you think it would (or should), the next morning you get the joy of climbing back out of the depths to your start point.  Also, significantly, on this particular hike, the journey down is about 16km whereas the path back up is 6km. That means only one thing – it’s steep!

Despite all of this, we really enjoyed the canyon. We met an American couple, Mike and Ishel, who were great fun and the scenery was pretty stunning too. It was definitely worth taking the hiking option as we felt like we’d connected our experience of the canyon together with a more substantial amount of time and of course energy. Plus, the changing views were awesome.

Arequipa
Back in Arequipa, after a 5am hike up the canyon wall and a trip over a 4875 metre mountain pass in the minibus, we treated ourselves to a celebratory craft beer and hot chocolate (no Bailey’s this time) before heading back to our guesthouse.

The next morning, we decided to do something we very rarely do, despite often having the opportunity. Yes, that’s right, historical culture fans – we went to a museum.

This is significant, you see, as museums aren’t really our thing. At one time, I would have apologised for not wanting to visit some cultural artefacts, lovingly preserved in glass cases in hushed rooms across the world. The more we travel, however, the more we realise that you have to do what you want to do; not what the lonely planet tells you you should do, nor necessarily what another traveller recommends as a ‘you can’t possibly miss it’ kind of thing. And importantly, don’t apologise for doing (or not doing) whatever it may be!

This particular museum, however, had an exhibit that Helena in particular, really wanted to see: the preserved frozen body of a sacrificed Incan girl. They have named her ‘Juanita: The Ice Princess’. A 20 minute introductory video tells of a girl who was effectively born and raised to be sacrificed. From a good family, virtuous, a virgin, she would (maybe?) have felt it a privilege to have been chosen as an offering to the gods in exchange for their mercy: which would come in the form of peace from the active volcano, Ampato. For me though, the most significant thing was that this girl was not only sacrificed, but she also had to hike her way to the summit of the 6310 metre summit in order to be so; in simple clothes and sandals. She would have been freezing, exhausted and possibly suffering from the effects of the altitude. A really inconceivable feat in many ways.

The idea was made even more impressive, if that’s the right word, when you consider what it would take to get up to that height. When we were talking with the tour guide about booking the Colca trek, I noticed that they offered trips to climb Chachani which, at 6075 metres, is apparently one of the world’s ‘easiest’ 6000m peaks. Tempted with the opportunity, and feeling rather confident having just been over the 4600m Salkantay pass with minimal issues, I rather nonchalantly asked about the price for the trek.

‘What kind of acclimatisation do you have?’ asked the lady. It was an interesting response, seeing as I’d asked about money. Nevertheless, I replied confidently, ‘Well, we’ve just spent about a week in Cusco and done the Salkantay trail. It goes to 4600m you know…’
‘It is not enough,’ she said, dismissing the request instantly, ‘You will not be able to climb Chachani.’ To be fair, she went on to explain that you really need to stay at or above 4000m for numerous days, taking in regular hikes even to be considered to start that sort of trek. It is good that the company take the issues of altitude seriously – but it made me think that poor old Juanita, who was actually pretty young, must have found it hard too.

Lake Titicaca
Back in Puno then, during the breaks in the weather, we did a little exploring, mainly to see Lake Titicaca the world’s largest high altitude lake. It seems like everything in this region is at altitude! Although we’d been given recommendations about visiting the famous floating islands, we just didn’t fancy it, so we relaxed in the town and planned our onwards travel.

It was time to cross into Bolivia. We could have taken a direct bus to La Paz, but we felt that Titicaca deserves a little time so we hopped over the border to Copacabana instead. Unfortunately, by the time we got there, Helena was feeling pretty rough, and the concept of trudging around the town, carrying all of our stuff, looking for a place to stay was a non-starter.

So, depositing Hels in a comfortable cafe with a cup of tea, I headed out to find some accommodation. It is a testament to the learning that comes with immersion in a language that I was able to visit four separate places, check if they had available rooms, ask to see the rooms, discuss prices and even negotiate a discount at one – using exceptional Spanish along the lines of: ‘¿Cien treinta Bolivianos para noche? ¡Nooo! ¡Este muy caro! ¿Habla … er … discount?’

Surprising as it may seem, I actually located a decent room in a hotel just around the corner from the cafe and we chilled out there while Helena recovered.

As she was feeling much better the next day, we hopped on a boat to Isla del Sol – the Island of the Sun – on which, ironically, the weather was horrendous! Definitely more of an Isla del rainingcloudyandprettydamnchillyifwe’rehonest!  We set off on a hike, not really knowing where we were going, and ended up having a lovely day. The weather brightened up; the island offered spectacular views of the lake from its spine ridge path; and we came across local town meetings where men and women were congregated in traditional dress talking through the issues affecting the community. Reaching Yumani at the southern tip of the island, we stopped for lunch overlooking the lake, before catching the boat back to Copacabana.

So that’s it for now – a short update as part of my attempt to get as much as possible written before we get home. We’re actually in Rio right now – crazy hey! – but you can look forward to blogs about La Paz, cycling down the World’s Most Dangerous Road, spending three days in a 4×4 crossing the salt flats, wine tasting and cooking courses in Chile, even more wine in Mendoza along with the friendliest hostel we’ve found since Thailand, the bright lights of Buenos Aires, the awesome natural energy of Iguazu Falls and the fun we had in Floreanopolis. I had better get writing!

2 thoughts on “It’s all about the altitude!”